As Retreat Opens, Pope Raises "Crisis of Credibility" In US Bench

Before all else, a Blessed New Year to one and all – hope you've had a great rest; Lord knows some of us could use a good bit more....

Either way, here we go again. 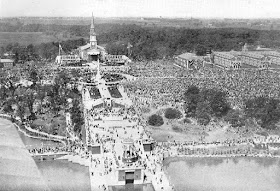 Eight decades ago, an "Enchanted Forest" was raised some 40 miles outside America's "Second City" – an epically grand seminary to anchor a church that the Successors of Peter would come to see as "Maxima": that is, Stateside Catholicism's "greatest" (read: largest) outpost.

In the beginning, the house-turned-town which would bear the name of its builder – the Brooklyn-born George Mundelein, the first "Cardinal of the West" – saw 750,000 of the faithful trek on foot from Chicago to mark the International Eucharistic Congress of 1926: the event that arguably put a US church beyond the Eastern seaboard on the global map for the first time.

This week, however, the same site is host to a far different moment from the teeming pilgrims and dozen-plus scarlet-painted train cars of that age... but no less an act at the behest of the Pope.

Far from the adoring crowds – and, indeed, deluxe celebrations – of Mundelein's postwar spectacle, today's US bishops have come to Chicagoland amid an overarching scandal, in penitence and listening for the future of the American Church. 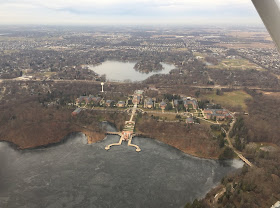 At least, that's the intent – even if other hubs have supplanted O'Hare Airport, the place remains the crossroads of the country, perhaps never more for its largest religious body than in these days.

Led by the preacher of the Papal Household, Capuchin Fr Raniero Cantalamessa, ten weeks after its summons, the bench's weeklong crisis retreat at Francis' behest opened earlier tonight with a lively talk to the 280-odd prelates...

...but even more, as it's still Christmas, this first night was headlined by a gift from the Pontiff – an eight-page letter which the USCCB will publish in full Thursday morning.

To be clear, the Pope's letter was brought by Cantalamessa without any advance knowledge by US officials. As previously relayed, a similar "very Ignatian" text was given by Francis to the Chilean bishops at the opening of their "command performance" for Roman discernment last May – a week which ended with the national hierarchy's resignation en bloc.

First reported by Whispers as this retreat opened, then given to the US bishops in printed copies both in English and Spanish for their private reading during tonight's Holy Hour, here's the first page of the coming message: 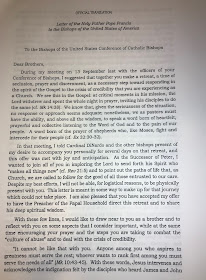 For those keeping score at home, this is the second critical missive from the Vatican to emerge within the last 36 hours over the handling of abuse-related issues between Rome and the States. Meantime, as these pages have relayed at length, the Stateside bench is due for its first ad limina visit to Papa Bergoglio's Vatican and Curia late this year.

For now, as the builder of this Retreat Week's site put it on his own entrance as Corporation Sole a century ago: "I am different... the Lord cast me in a different mold. I am quicker in grasping a thing; and I am more likely to act more quickly."

Beginning with a certain prominent post which "no one wants," there'll be more of this from the Corporation Rome over the weeks to come – yet even before all the rest, the coming days will be quite full. 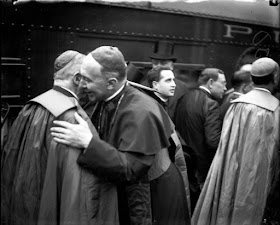 Lest it wasn't already clear, you're seeing reporting here that can't be found anywhere else.

Ergo, in the hopes of keeping it going, it apparently bears reminding that these pages only keep on by means of your support... otherwise, welp, what better way to go out?

SVILUPPO: Published Thursday morning by both the Vatican and the USCCB, here, the letter's full text.