Where's the (Licit) Beef? – Amid St Pat's (Fri)Day, The Indult Desk Is Open 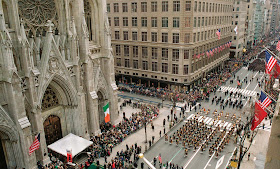 (SVILUPPO: Following its most recent update, the Master List now comprises a record 120-plus US dioceses – fully two-thirds of the nation's Latin-church sees.)

Just because it's Lent doesn't mean there isn't some fun to be had... and in that light, this edition of the 40 Days just so happens to bring a long-awaited return to one of this shop's favorite exercises.

Eleven years ago, among the first splashes made here was a national take on what came to be termed the The Corned Beef Indult – that is, the dispensation granted by a diocesan bishop so the Irish faithful can enjoy the patronal sandwich with a clear conscience when St Patrick's Day falls on a Lenten Friday, thus pitting the feast against the obligatory abstinence from meat.

This year marks the first collision of the two observances since, and in most cases the announcements are just beginning to bubble up, numbering over 40 so far. As history goes, in 2006 the general permission was given by nearly half of the nation's 179 Latin-church jurisdictions.

In any case, this is indeed a thing – if you will, the "Amoris Wars" for the non-chattering class (just without the invective). That the story takes on a life of its own in local media and over dinner tables is a sound testimony to two linchpin realities an "anger first" discourse seems to easily forget: first, that the identity-marker of "Fish Fridays" holds an enduring place among the faithful, with the practice maintained by close to a supermajority of American Catholicism's 70 million souls (per CARA figures)... even more significantly, meanwhile, it just goes to show again that when it comes to widespread fascination with this faith, nothing beats even the relatively minor elements of the Catholic imagination (however much Dan Brown may try).

Before going into this edition's master list of dispensed dioceses, a couple pieces of context bear recalling. 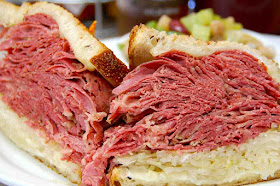 First, in those places where the Apostle of Ireland is the patron of the diocese or of the parish church, within said territory Paddymas ranks as a proper solemnity, thus exempting the obligatory abstinence from meat by the law itself. Among other examples, this is the case in New York, and was clarified as such by Cardinal Timothy Dolan in a late January letter to his priests.

To be fully specific, that general rule only applies where Patrick is patron of the diocese, not diocese-wide where he's patron of the cathedral – unless his diocesan patronal status is likewise formally in place, the cathedral's name-day only ranks as a proper feast and mandatory abstinence remains intact. (In another related instance, as St Joseph's Day and Annunciation are universal solemnities, abstinence is not observed across the Catholic world whenever March 19th or 25th fall on a Friday.)

Second, even as the bulk of the 70 million Stateside faithful will likely get the green light at the diocesan level owing to large-scale Irish populations and simple concern for the welfare of souls, it bears recalling that – in cases where a diocesan indult hasn't been granted – pastors of parishes may dispense their own people from avoiding meat given "just cause" as with any Lenten Friday; this is usually done on an individual basis by request (for example, for a parishioner attending a wedding rehearsal dinner with meat on the menu).

Just to name three, Detroit, Portland (Oregon) and Salt Lake have gone that route this year in lieu of the blanket indult, while the diocese of Trenton and archdiocese of St Louis are only granting the permissions to functions held on church property (for the latter, a notably more restrictive stance than then-Archbishop Raymond Burke took there last time). Elsewhere, keeping with their shared reputation for seeking to bolster an ironclad Catholic identity, the archdiocese of Denver and diocese of Lincoln are the lone US sees to have publicly denied granting a broad dispensation.

Thirdly, to be clear, nobody's getting off scot-free regardless of local policy – in each instance where the indult's been granted, the move is accompanied by a pro forma encouragement (albeit not an order) that abstinence should either be transferred to the prior or following day, or that some other act of penance or charity be substituted for digging into the beef. In any event, those traveling on the 17th itself are bound by the decision of the diocese in which they happen to be, not that of the place where they reside.

All that said, just because you don't see your own local church listed below doesn't mean you're out of luck – if anything, these announcements are usually made with little fanfare, or simply circulated internally to the parishes.

Ergo, as the following was initially compiled from publicly available notices, the list will be kept updated as the day approaches, so wherever a permission has been granted and isn't noted here, please do send it along – you can email it, tweet it... and given the priority on getting word around, even the combox is open. (NB: anything not germane to the topic will not be published.)

And lastly, much as keeping you lot out of Hell (at least, on this count) is its own reward, alas, that alone can't pay the bills – as ever, these pages keep afloat solely by means of your support....

For the commemoration of St Patrick, 17 March 2017, the following local churches are generally dispensed or granted a commutation from Lenten abstinence by act of the respective (arch)bishop or the proper solemnity of the diocesan patron – conditions/substitions may vary by jurisdiction:

All dioceses of Wisconsin and Georgia